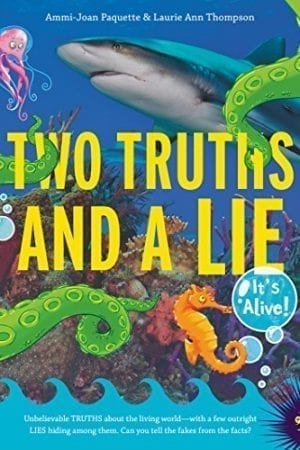 TWO TRUTHS AND A LIE: IT'S ALIVE

“Considering the fresh attention being paid to teaching a skeptical approach to information evaluation, this series opener couldn’t be better timed. A brief but savvy guide to responsible research methods adds further luster to this crowd pleaser.” —ALA Booklist (starred review)

Two Truths and a Lie is the first book in a fascinating new series that presents some of the most crazy-but-true stories about the living world as well as a handful of stories that are too crazy to be true—and asks readers to separate facts from fakes!

Did you know that there is a fungus that can control the mind of an ant and make it do its bidding? Would you believe there is such a thing as a corpse flower—a ten-foot-tall plant with a blossom that smells like a zombie? How about a species of octopus that doesn’t live in water but rather lurks in trees in the Pacific Northwest?

Every story in this book is strange and astounding. But not all of them are real. Just like the old game in this book’s title, two out of every three stories are completely true and one is an outright lie. Can you guess which? It’s not going to be easy. Some false stories are based on truth, and some of the true stories are just plain unbelievable. And they’re all accompanied by dozens of photos, maps, and illustrations. Amaze yourself and trick your friends as you sort out the fakes from the facts!

Acclaimed authors Ammi-Joan Paquette and Laurie Ann Thompson have teamed up to create a series of sneaky stories about the natural world designed to amaze, disgust, and occasionally bamboozle you. 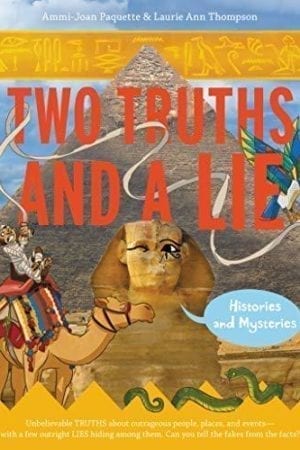 TWO TRUTHS AND A LIE: HISTORIES AND MYSTERIES

Crazy-but-true stories about history, geography, and human achievement make this acclaimed nonfiction series perfect for fans of curiosities and wonders. A fun way for middle graders to explore ways to separate fact from fiction.

Did you know that a young girl once saved an entire beach community from a devastating tsunami thanks to something she learned in her fourth-grade geography lesson? Or that there is a person alive today who generates her own magnetic field? Or how about the fact that Benjamin Franklin once challenged the Royal Academy of Brussels to devise a way to make farts smell good?

Welcome to Two Truths and a Lie: Histories and Mysteries! You know the game: Every story in this book is strange and astounding, but one out of every three is an outright lie.

Can you guess which stories are the facts and which are the fakes? It’s not going to be easy. Some false stories are based on truth, and some of the true stories are just plain unbelievable! Don’t be fooled by the photos that accompany each story—it’s going to take all your smarts and some clever research to root out the alternative facts.

From a train that transported dead people to antique photos of real fairies to a dog who was elected mayor, the stories in this book will amaze you! Just don’t believe everything you read. . . .