Trouble is a curious and energetic coyote pup whose parents fear that his inquisitiveness will get him into trouble.  Sure enough, one night he strays from the den to explore the contents of a local produce truck and finds himself transported to a farmer’s market in New York City.  A wily crow named Mischief guides the young coyote to Central Park where he makes friends with a shy opossum named Rosebud and a wise owl named Professor. When Trouble falls for a prissy but good-natured poodle whose owner brings her to the park, however, he begins to lose some of his wildness and is less cautious about the dangers of the city.  When he gets close to a little girl visiting Central Park, he is spotted and Animal Control vows to catch him. Will Trouble risk the perils of a long journey home or, with the help of his friends, evade capture and make Central Park his home? Based on the real-life instances of coyotes inhabiting Central Park, this is a perfect choice for animal lovers of all ages. 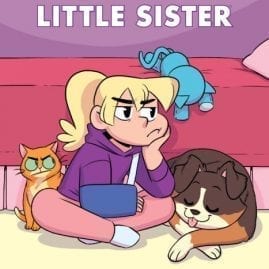 In this spin-off of the popular Baby-Sitters Club series and featuring Kristy’s stepsister, Karen, younger readers can enjoy the graphic novel format along with stories perfect for them.  In this story, Karen is having a terrible day.  Her favorite jeans are missing, there is no prize in the cereal box, and even Boo-Boo the cat won’t play with her!  She even gets punished and sent to her room.  Despite all of her attempts to make the day better, nothing seems to be going right.  If she can’t find a way to turn her luck from bad to good, will this be her worst day ever?  A delightful story and format for those new to the world of graphic novels. 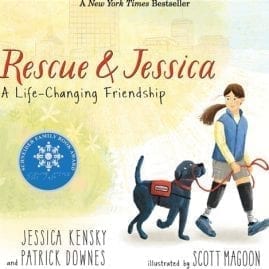 Rescue and Jessica: A Life-Changing Friendship

Rescue always believed he would be a seeing  eye dog like the other canines in his family.  When he gets the news that he is better suited to being another type of service dog, he wonders if he will be up to the task.  Then he meets Jessica, a girl whose life has turned out differently than she imagined as well and they realize that together they can accomplish much more than they could apart.  Based on a true story, this tale of the incredible relationship between a girl and a dog will inspire readers of all ages to reach for their dreams.

Rescue and Jessica: A Life-Changing Friendship 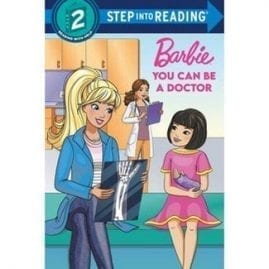 Barbie - You Can Be A Doctor

When Barbie visits the doctor, Dr. Vargas shows Barbie how to weigh and measure patients and even lets her help remove an arm cast!  With basic vocabulary and short sentences, this simple story is perfect for beginning readers ready to explore this popular occupation.

Barbie - You Can Be A Doctor 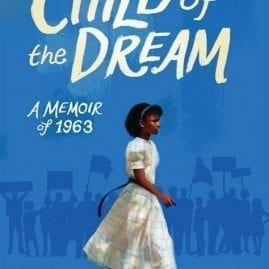 In this coming-of-age memoir, Sharon Robinson, the daughter of baseball legend Jackie Robinson, focuses on the year 1963 when she was 13 years old.  She has a privileged life in a wealthy neighborhood in Stamford, Connecticut, living in a huge house, riding her own horse, and attending a school where she is one of only two black students in her class.  Her father has a legacy of being involved in the civil rights movement, but when Sharon sees the church bombings, children’s marches, and imprisonment of the protestors in the South, the struggle for equal rights becomes one she can’t watch from the sidelines.  George Wallace’s chants of “segregation now, segregation tomorrow, and segregation forever” disturb and inspire her to become involved in the movement.  Her family sponsors fundraisers for the non-violent protests and she accompanies them to hear Martin Luther King speak at the March on Washington.  This insider’s account of one of the most important years in the civil rights movement is both educational and insightful for young readers of all backgrounds.

Indira Story, a young girl living in the fictional town of Origin, has been working hard to make her dream come true.  She yearns to be chosen at the upcoming auditions to go to the city of Fable and attend Protagonist Preparatory, a school where famous characters like Alice of Wonderland and Romeo Montague train aspirants to become successful characters in actual stories.  When she is chosen to go to the school but will be trained to be a side character, not the main protagonist she had hoped, Indira clings to the hope that she will be picked by an author to play a secondary, but important, role in a story.  When her efforts are sabotaged, she realizes that an evil force may be to blame, a force that threatens to destroy Fable.  With her friends Maxi and Phoenix by her side, Indira must discover whether a side character can be the real hero after all.  The perfect blend of fantasy and adventure. 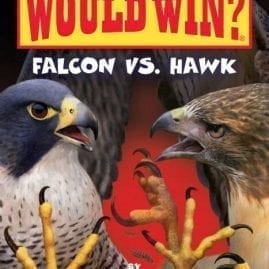 Who Would Win: Falcon vs. Hawk

What if a peregrine falcon and a red-tailed hawk had a fight?  Who do you think would win?  This nonfiction reader compares and contrasts these two ferocious birds, with information about the anatomy and behavior of each.  Facts, photos, and realistic illustrations make this a great choice for nonfiction lovers.

Who Would Win: Falcon vs. Hawk