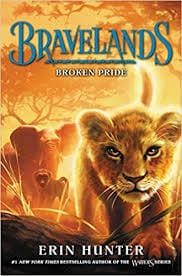 When a rival lion, Titan, kills the lion pride’s leader, the young cub of the fallen ruler, Fearless, must flee, leaving his mother and sister behind.  Taken in and raised by a troop of baboons, young Fearless grows close to two member of the group in particular, Thorn and Mud.  When a change in the troop leadership forces the lion out, however, he becomes determined to reunite with his family in spite of Titan’s threat.  Thorn, unable to rise in power due to the caste system of the baboons, joins Fearless as they seek the help of the Great Mother of the Bravelands.  There they meet Sky, a young elephant whose visions of the future portend great danger and destruction for them all.  This new animal adventure series set in the African savanna is a must-read for fans of Erin Hunter’s Warrior series.  Age 9+