Salt to the Sea by Ruta Septys 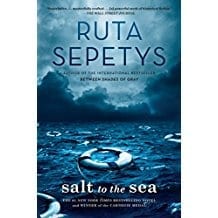 It is January of 1945 and millions of refugees are fleeing Eastern Europe in advance of the approaching Red Army.  Desperate to reach the Wilhelm Gustoff, a ship that can carry them to freedom are Joana, a Lithuanian nurse, Emelia, a Polish teen, and Floria, a Prussian army deserter.  Each of these carries hidden secrets which must ultimately be faced.  A work of historical fiction based on the true story of the world’s greatest maritime disaster, Salt to the Sea is told from the perspective of each of the