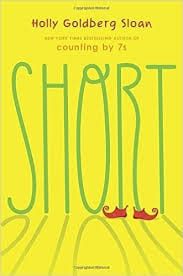 Eleven year-old Julia Marks has always been very short for her age, a fact she would rather not discuss.  She, at her mother’s insistence, joins her brother to audition for a community theater production of The Wizard of Oz and is cast as a Munchkin. Julia has never seen herself as a performer, but as she gets to know several of the play’s cast and crew, her confidence begins to grow. Olive, one of three adults with dwarfism also playing a Munchkin, and seventy-six year-old Mrs. Chang, a skilled costumer and fantastic Winged Monkey, befriend her and help her see that people are often much more than they appear at first glance. Perhaps being short doesn’t define Julia after all! A story for readers 9+ that will delight and inspire.