In a world with no power, chaos soon descends. A powerful look at the disintegration of society in the wake of a massive and mysterious outage that has knocked out all modern amenities.

Fifteen-year-old Emma has moved house with her ex-Marine mother and younger brother. It’s a brand-new condo building, which explains the semi-regular power outages, as workers complete the units around them. So Emma isn’t particularly concerned when the latest blackout hits just as they are preparing to leave town on a long weekend camping trip. But then the car won’t start, and their cellphones appear dead — and all the cars outside their building seem to be stalled in a long traffic jam …

In the midst of what appears to be a massive power outage, with their camping gear packed and ready, Emma and her family canoe over to the islands, just offshore, to wait it out. But while they land on an isolated island, with a relatively hidden site, they are far from safe, as people become increasingly desperate to find food and shelter. And as the days pass, and the power remains out, the threat of violence becomes all too real. 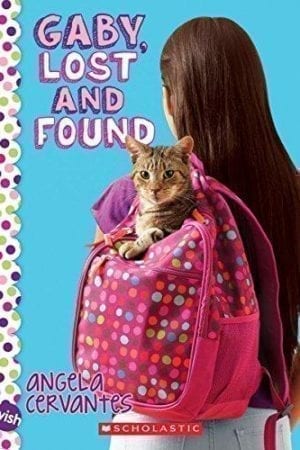 Noah Livingston knows he is destined to survive.

The 64 members of Fire Lake’s sophomore class are trapped in a place where morals have no meaning and zero rules apply. But Noah’s deaths have trained him-hardened him-to lead the strongest into the future … whatever that may be. And at any cost.

In a violent world where brute force passes for leadership, it’s tempting to lay back and let everyone else battle it out. But Min’s instincts rebel against allowing others to decide who lives and who dies. She’s ready to fight for what she believes in. And against whomever might stand in her way. 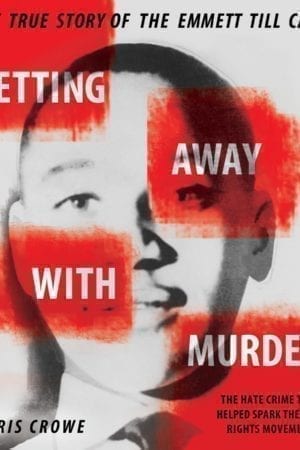 Getting Away With Murder: Emmett Till

Revised and updated with new information, this Jane Adams award winner is an in-depth examination of the Emmett Till murder case, a catalyst of the Civil Rights Movement.

The kidnapping and violent murder of fourteen-year-old Emmett Till in 1955 was and is a uniquely American tragedy. Till, a black teenager from Chicago, was visiting family in a small town in Mississippi, when he allegedly whistled at a white woman. Three days later, his brutally beaten body was found floating in the Tallahatchie River.

In clear, vivid detail Chris Crowe investigates the before-and-aftermath of Till’s murder, as well as the dramatic trial and speedy acquittal of his white murderers, situating both in the context of the nascent Civil Rights Movement. Newly reissued with a new chapter of additional material–including recently uncovered details about Till’s accuser’s testimony–this book grants eye-opening insight to the legacy of Emmett Till. 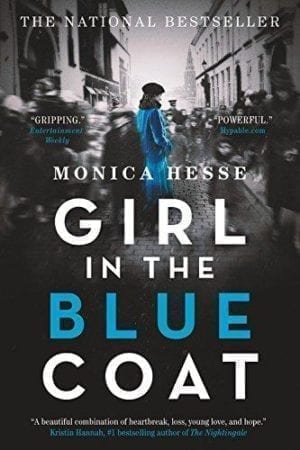 Girl in the Blue Coat

The bestselling, “gripping” (Entertainment Weekly), “powerful” (Hypable), “utterly thrilling” (Paste.com) winner of the Edgar Award for Best Young Adult Mystery, perfect for readers of Kristin Hannah and Ruta Sepetys
Amsterdam, 1943. Hanneke spends her days procuring and delivering sought-after black market goods to paying customers, her nights hiding the true nature of her work from her concerned parents, and every waking moment mourning her boyfriend, who was killed on the Dutch front lines when the Germans invaded. She likes to think of her illegal work as a small act of rebellion.
On a routine delivery, a client asks Hanneke for help. Expecting to hear that Mrs. Janssen wants meat or kerosene, Hanneke is shocked by the older woman’s frantic plea to find a person–a Jewish teenager Mrs. Janssen had been hiding, who has vanished without a trace from a secret room. Hanneke initially wants nothing to do with such dangerous work, but is ultimately drawn into a web of mysteries and stunning revelations that lead her into the heart of the resistance, open her eyes to the horrors of the Nazi war machine, and compel her to take desperate action.
Beautifully written, intricately plotted, and meticulously researched, Girl in the Blue Coat is an extraordinary novel about bravery, grief, and love in impossible times. 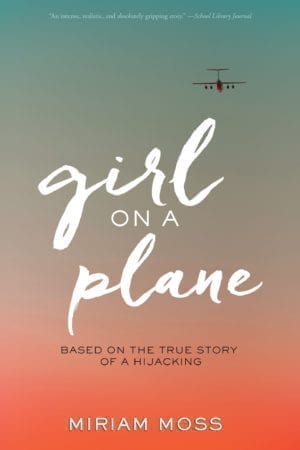 Girl on a Plane

Bahrain, 1970. After a summer spent with her family, fifteen-year-old Anna is flying back to boarding school in England when her plane is hijacked by Palestinian terrorists and taken to the Jordanian desert. Demands are issued. If they are not met, the terrorists will blow up the plane, killing all hostages. The heat becomes unbearable; food and water supplies dwindle. All alone, Anna begins to face the possibility that she may never see her family again. Inspired by true events, this is a story about real people facing horror with courage and resilience.
$9.99 View Product

Before she had an eating disorder, twelve-year-old Riley was many things: an aspiring artist, a runner, a sister, and a friend.

But now, from inside the inpatient treatment center where she’s receiving treatment for anorexia, it’s easy to forget all of that. Especially since under the influence of her eating disorder, Riley alienated her friends, abandoned her art, turned running into something harmful, and destroyed her family’s trust.

If Riley wants her life back, she has to recover. Part of her wants to get better. As she goes to therapy, makes friends in the hospital, and starts to draw again, things begin to look up.

But when her roommate starts to break the rules, triggering Riley’s old behaviors and blackmailing her into silence, Riley realizes that recovery will be even harder than she thought. She starts to think that even if she does “recover,” there’s no way she’ll stay recovered once she leaves the hospital and is faced with her dieting mom, the school bully, and her gymnastics-star sister.

Written by an eating disorder survivor and activist, Good Enough is a realistic depiction of inpatient eating disorder treatment, and a moving story about a girl who has to fight herself to survive.

After a summer cooped up in his family’s store selling bait, tackle, and soft drinks to tourists, fourteen-year-old Chase finally gets a chance to go on his first solo geocaching adventure.
Using his GPS in the foothills of the Arizona White Mountains, he uncovers the geocache—a small metal box—hidden deep in the woods in some undergrowth. Inside, with a few plastic army men and a log book, is a troubling message asking for help in a child’s handwriting.
When Chase returns later, he finds another message in the geocache box, this time asking for food. He is curious—and worried—about the mysterious individuals leaving the messages. Before he can turn to the adults around him for help, Chase is pulled into a complex, dangerous drama and a chilling confrontation with an unstable father who will stop at nothing to hold on to his children.
Young readers will learn all about the high-tech adventure game of geocaching in Katy Grant’s exciting novel that features heart-pounding action and surprising plot twists. 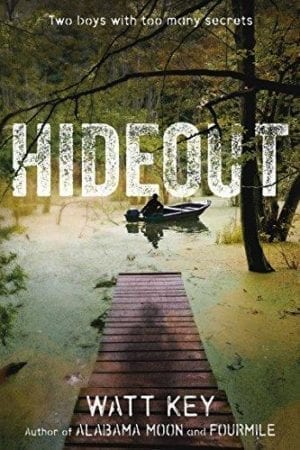 In this riveting middle-grade adventure from Watt Key, the son of a Mississippi policeman finds a boy living on his own in the wilderness.

Twelve-year-old Sam has been given a fishing boat by his father, but he hates fishing. Instead he uses the boat to disappear for hours at a time, exploring the forbidden swampy surroundings of his bayou home. Then he discovers a strange kid named Davey, mysteriously alone, repairing an abandoned cabin deep in the woods. Not fooled by the boy’s evasive explanation as to why he’s on his own, Sam becomes entangled in his own efforts to help Davey.

But this leads him to telling small lies that only get bigger as the danger increases for both boys and hidden truths become harder to conceal.

From the author of Alabama Moon, Hideout is complex tale of friendship, kindness, and dangerous secrets.

“A compelling read that will keep a tween audience burning the flashlight batteries late into the night.” —The Bulletin

“In the tradition of Gary Paulsen’s survival tales . . . short chapters filled with action and adventure keep the pacing taut and will entice reluctant readers . . . A good pick for action/adventure fans.” —School Library Journal

“It’s man versus nature as well as man versus man in this tale that will have strong appeal to Key’s fans and adventure lovers.” —Kirkus Reviews

“An exciting adventure set in Mississippi’s Pascagoula River marshlands . . . The boys’ survivalist adventures in the swamps are suspenseful, [with a] reassuring ending.” —Booklist 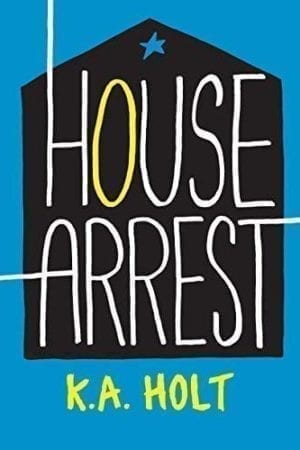 Timothy is a good kid who did a bad thing. Now he’s under house arrest for a whole year. He has to check in weekly with a probation officer and a therapist, keep a journal, and stay out of trouble. But when he must take drastic measures to help his struggling family, staying out of trouble proves more difficult than Timothy ever thought it would be.

Touching, humorous, and always original, House Arrest is a funny book for teens in verse about a good boy’s hard-won path to redemption. The ideal addition to any young adult book collection, House Arrest will delight reluctant readers and provides teenage motivation when it’s needed most. 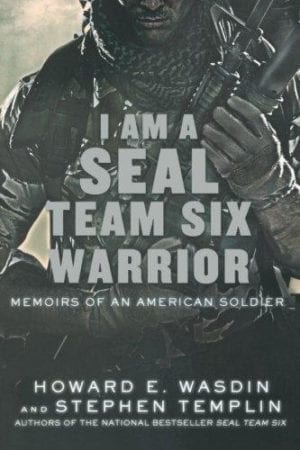 I Am a Seal Team Six Warrior

When the Navy sends their elite, they send the SEALs. When the SEALs send their elite, they send SEAL Team Six—a secret unit made up of the finest soldiers in the country, if not the world. I Am a SEAL Team Six Warrior is the dramatic tale of how Howard Wasdin overcame a tough childhood to live his dream and enter the exciting and dangerous world of U.S. Navy SEALS and Special Forces snipers.

His training began with his selection for Basic Underwater Demolition/SEAL (BUD/S)—the toughest and longest military training in the world. After graduating, Wasdin saw combat in Operation Desert Storm as a member of SEAL Team Two. But he was driven to be the best of the best—he wanted to join the legendary SEAL Team Six, and at long last he reached his goal and became one of the best snipers on the planet. Soon he was fighting for his life in The Battle of Mogadishu. This is Howard Wasdin’s story of overcoming abuse and beating the odds to become an elite American warrior. 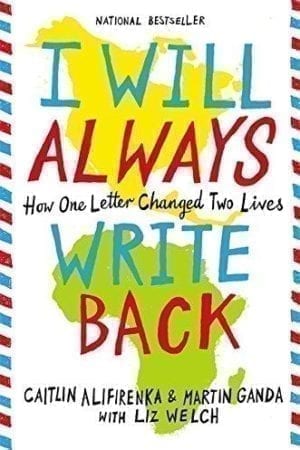 I Will Always Write Back

The New York Times bestselling true story of an all-American girl and a boy from Zimbabwe — and the letter that changed both of their lives forever.

It started as an assignment. Everyone in Caitlin’s class wrote to an unknown student somewhere in a distant place.

Martin was lucky to even receive a pen-pal letter. There were only ten letters, and fifty kids in his class. But he was the top student, so he got the first one.

That letter was the beginning of a correspondence that spanned six years and changed two lives.

In this compelling dual memoir, Caitlin and Martin recount how they became best friends–and better people–through their long-distance exchange. Their story will inspire you to look beyond your own life and wonder about the world at large and your place in it.