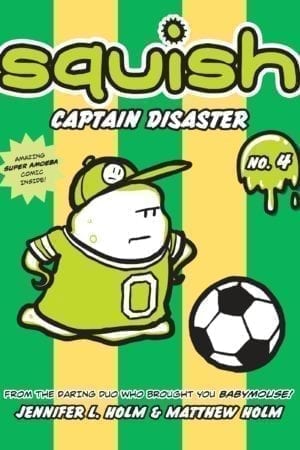 It’s soccer season! But the Waterfleas (Hey, it could be worse—Okay, maybe it couldn’t.) are getting pummelled game after game. Squish knows winning isn’t everything, but it’s something right? Can Squish turn the losing streak around when he becomes team captain? Will Pod figure out how to harness the power of lightning? And how can amoebas play soccer when they don’t have any feet? Find out in the electrifyingly funny page-turner Squish #4: Captain Disaster—saving the world, one cell at a time!

Yowza! You can draw comics, too! Look in the back to find out how to draw one of the Squish characters! Also includes instructions for a sensational science experiment you can do at home! Shazam!

Here’s what people are saying about everyone’s favorite amoeba!

New York Times:
“An energetic, good-hearted escapade, one that young readers will enjoy.”

Starred Review, Kirkus Reviews:
* “Hilarious. If ever a new series deserved to go viral, this one does.”

The Bulletin:
“A perfect mix of writing that is simple enough for early readers but still remarkably snarky, clever, and entertaining. Kids will soak up the humor, tidbits of science instruction, and adventure.”